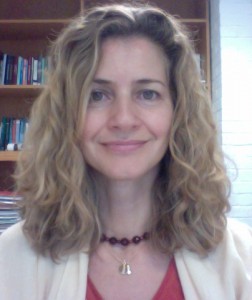 Anna Christina Ribeiro is an associate professor of philosophy at Texas Tech University, where she has been since earning her Ph.D. from the University of Maryland in 2006. She specialises in aesthetics and the philosophy of art, focusing primarily on poetry, one of our earliest and most widespread forms of artistic expression. Her philosophical research on poetry and aesthetics in general is informed by cognitive and evolutionary psychology, pragmatics and metrical phonology in linguistics, and by work in disciplines such as classics, anthropology and archaeology on oral literary traditions ancient and contemporary.

She is currently working on a book tentatively entitled Stealing the Strings of Sappho: Essays in the Philosophy of Poetry, under the auspices of the Philip L. Quinn fellowship at the National Humanities Center.

Wednesday, 18 June 2014The Musilanguage Hypothesis and the Origins of Poetry16:00-18:00 at IALS Conference Room (Ground Floor)

Abstract: An intentional-historical formalist definition of poetry such as the one offered in Ribeiro (2007) inevitably raises the question of how poetry first emerged, and why. On this view, repetitive linguistic patterning is seen as a historically central feature of poems, and one that has both an aesthetic and a cognitive dimension (e.g. in being pleasing to the ear and easier to remember). Combining the Darwinian idea of a musical protolanguage with analyses of ‘babytalk’, I suggest that this central feature of poetic practices first emerged as a vestige of our prosodic proto-speech and of our earliest form of communication with our caregivers. Conversely, I suggest that the existence and universality of ‘babytalk’, together with the universality and antiquity of poetic practices, argue in favor of the musical protolanguage hypothesis over its competitors, lexical and gestural protolanguage. One consequence of this proposal is a reversal of how we understand poetic repetition: rather than being justified in terms of the mnemonic needs of oral cultures, it is now understood as an aesthetically pleasing exploitation of features already found in speech. Further, on the basis of the recently proposed ‘serial founder effect’ in the phonemic diversity of languages, I offer the empirical prediction that poetic form will become more ‘musical’ the fewer phonemes a language has, to compensate for phonemic loss. The late advent of rhyme is offered as evidence of this possibility.